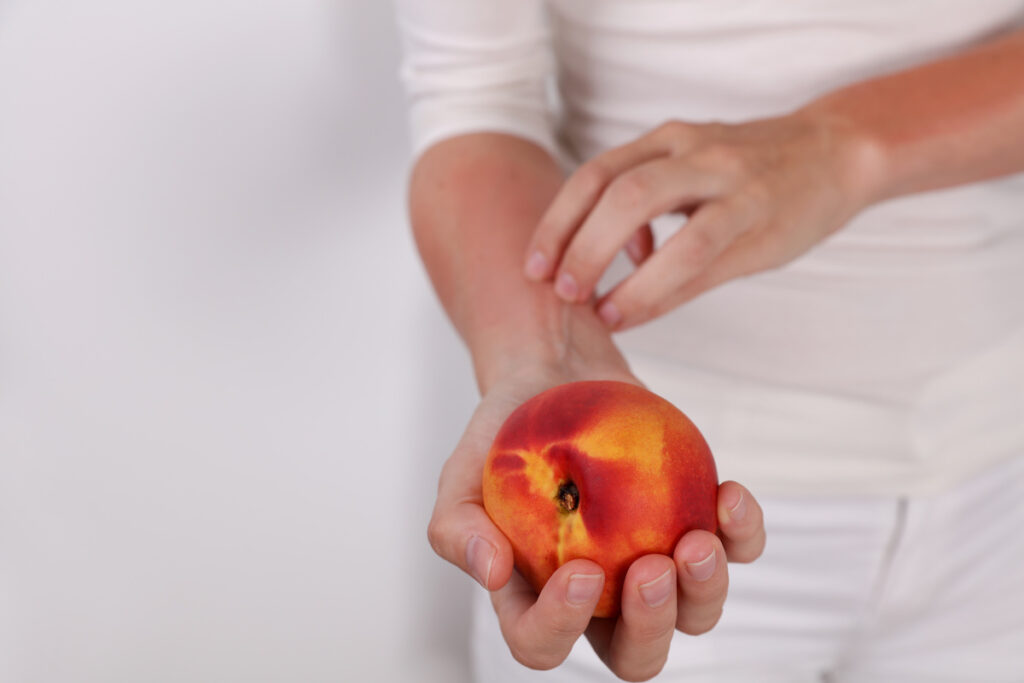 Food allergies occur when the body has an adverse or abnormal response to a food. An allergic reaction can be immediate and life threatening, such as with tree nut allergies (peanut is common) or with shellfish.

A food reaction can also have a delayed onset, taking three to five days to show-up. The allergy may cause hay fever-like symptoms, digestive distress, eczema or other skin irritation, or changes in behavior and mental focus. This delayed reaction is called “food sensitivity” and usually is not life threatening.

Also, keep in mind these key indicators for a food allergy versus a food sensitivity:

A true food allergy is typically permanent. Whenever you eat or are exposed to a particular food, it will provoke a reaction that will exist over your lifetime.

Food sensitivity happens gradually. Triggers may include stress,infection, poor eating habits (e.g., over-consumption of foods with additives,preservatives), or foods exposed to toxins such as pesticides and pollutants.Food sensitivity may lead to chronic health problems such as digestive disorders.

What happens in your body during an Allergic Reaction to Food

Once an antibody is produced against a specific invader, the next time it enters the body, the immune system “remembers” it and produces more of the same antibodies to destroy the invader. This is great if you’ve got a virus or bacteria circulating through the body, but it’s not great when you’ve just eaten a food you enjoy. Sometimes it is obvious what food triggered the reaction and other times, it’s not as clear—especially if the reaction onset is delayed by hours or days. This is where food sensitivity or allergy testing, such as the testing offered at Palm Harbor Pharmacy, can be useful.

A food allergy or sensitivity blood test of Ig activity is usually performed in response to different allergens, each of which is associated with a different Ig type.

There various Ig types have different, yet synergistic roles in the immune system:

IgE antibodies cause the body to react, at times violently and immediately, to things such as pollen, fungus, insect stings, medications, milk and other foods. IgE levels are often highest in people with allergies, including food allergy. An IgE test covers the major food allergens that produce immediate reactions in the body, such as nut, egg, cow’s milk, shellfish, and soy.

IgG antibodies fight bacterial and viral infection. Found in all body fluids, this antibody is typically associated with food sensitivity.

IgA antibodies protect body surfaces exposed to outside foreign substances. It’s abundant in mucus found throughout the body, including the gut; a deficiency in IgA could be tied to adverse responses to food.

An IgE test can be combined with IgA and IgG tests for a more comprehensive test of nearly 200 allergens including meat, dairy, starches and grains, mold and other environmental substances.

There are many ways to approach testing, including a skin prick test that is performed by a physician. The type of testing a person requires depends upon type and severity of symptoms among other factors. One of our friendly Palm Harbor pharmacists can help you understand food sensitivity testing and coordinate certain types of Ig testing with your personal physician.

What Happens after Food Sensitivity Testing?

Based on your test results and personal health history, your physician may make recommendations for dietary changes and nutritional supplementation. This is because reactions to food are often not just about eliminating a food. It’s about looking at the whole picture of your health and the role food plays as both nourishment and medicine for you.

The Role of Probiotics in Managing Food Sensitivity or Allergy

An imbalance in gastrointestinal (GI) flora can create health issues and is typically the result of poor diet, stress, use of antibiotics, illness and food allergies. Probiotics elevate natural “killer cells” that gobble up disease-generating “invader cells” and may protect nutrients that would otherwise be destroyed by pathogens.

Balance your GI flora by taking a probiotic supplement. Probiotics are live, microbial food ingredients similar to the health-enhancing microorganisms that already exist in the GI system. Well-researched health benefits show taking a probiotic will help . . .

Regarding dietary allergens and immunity, scientists believe probiotics achieve their health benefits by stimulating the immune response to increase the secretion of immunoglobulin-A (IgA), which boosts the body’s response to food allergens. Elevated IgA may also decrease pathogens in the gut, which improves the balance of GI flora.

Probiotic supplements come in liquid, powder, chewable and capsule form, ranging from one million to several billion live organisms. Most are sold refrigerated. Keep probiotics properly stored so as not to kill the live, healthy bacteria.

Even though probiotics have well documented health benefits, they are not a panacea. Probiotics are most effective when you are supporting your health with a balanced diet. Your health practitioner or the friendly staff at Palm Harbor Pharmacy can recommend probiotic strains and dosage (and any other supplements) suited for your specific health concerns.

Shop our new online store for the best deals

go to top of page